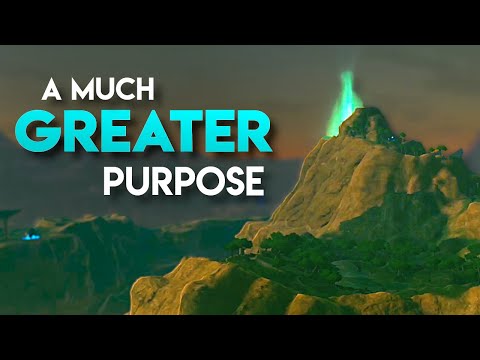 Much of what Nintendo has come to be and accomplished over the years come through not just the tireless efforts of an amazing team, but under the direction of one of the most influential presidents of the company: Satoru Iwata. Iwata passed away during the development of The Legend of Zelda: Breath of the Wild, and his absence resonated deeply with the team. The game director Hidemaro Fujibayashi spoke in an interview of Iwata, that the development team “had the sense that [Iwata] was watching over our work. That became a source of motivation, a drive for us to improve and be better.” As a way of paying tribute to the late president, the rather unique location of Satori Mountain was based around his memory and the extent of the influence he had on those around him.

YouTuber Croton breaks down the hidden significance of Satori Mountain that most casual players would overlook. Aptly named “Satori” in memoriam of Satoru Iwata, it is home to an elusive creature known as the Lord of the Mountain. Its presence is highlighted by the green beacon that shines from the top of the mountain about once every in-game week, when players can attempt to approach the creature. According to the Hyrule Compendium, “legends say this holy creature is a reincarnation of a sage that died on the lands it now protects.” Evidence of this can be found on the surrounding areas of the mountain–fauna and flora that are not normally native to such a region in Hyrule flock in abundance. The remains of a campsite suggest that the sage lived a life with little material possessions, instead devoting himself to maintaining the orchards and forests not just for his own self-consumption, but as a way to help sustain the surrounding wildlife. Though he benefits from the land as a means of survival, this sage ensured that he give back what he had taken. Croton even provides a detailed map of Satori Mountain marked with these various places that players can mine for resources, or simply to explore and admire the extent of detail!

Iwata’s legacy is reflected in this Lord of the Mountain–as this creature’s initial physical form passed on, it still lived in spirit to watch over its mountain, just as Iwata’s influence continues to inspire and lead others today. An easily overlooked detail that pays further tribute to Iwata, Blupees– glowing, rabbit-like creatures that live under the protection of the Lord of the Mountain– can be found all across the land out to the furthest reaches of Hyrule. Much like these curious creatures, Iwata’s impact stretched beyond what he was ever capable of imagining. You are sure to find traces of his influence no matter where you go!