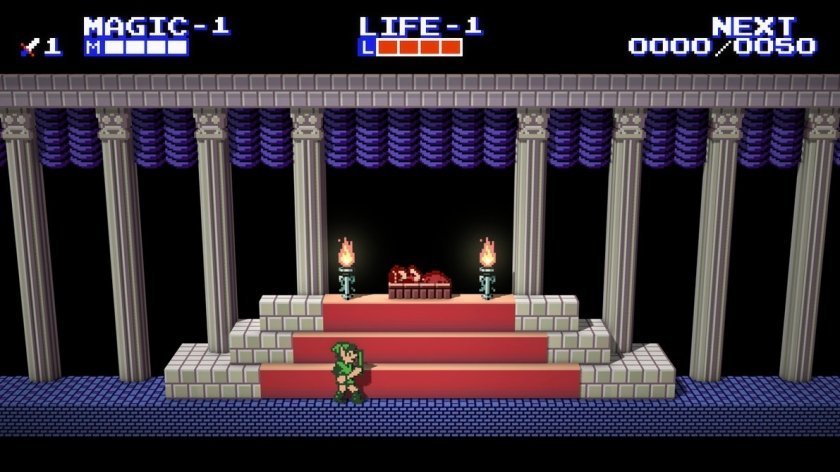 We all know about Zelda II: The Adventure of Link. The awkward NES sequel to Legend of Zelda from 1987. It tried to do something drastically different from the first game. A side-scrolling RPG with some annoying platforming and confusing dungeon design. It had some great reviews at the time, however it was clear that the gameplay style wasn’t the final choice for Nintendo since Zelda III: Link to the Past went back to the top down format.

Then Nintendo never went back to it. We had a few glimpses in the Game Boy Color games. We never got anything close to the Adventure of Link… and before you ‘@’ me about the CD-I games. They don’t count. They will never count.

It’s weird. Nintendo returned to previous games with newer ones. We had A Link to the Past come back in Link Between Worlds. We had two 3DS remakes of Ocarina of Time and Majora’s Mask. Nintendo used the original Legend of Zelda during the game design of Breath of the Wild. The only references from Adventure of Link that showed up in future games? Aside from names and places in the second Zelda game being reused in future games; there was the ‘Underground Maze’ level in Super Smash Bros. Melee that was the closest thing to a gameplay revisit.

Another game came out in 1987 for the Famicom Disk System. Castlevania II: Simon’s Quest. Now there isn’t a ‘Two Guys Playing Castlevania’… yet. Like Adventure of Link, Simon’s Quest was a departure from the previous game. The game was also an side-scrolling RPG with some annoying platforming and confusing mansion design.

Like the Zelda series, Konami went back to the same formula that made the first Castlevania great and they kept it that way until 1997. Konami decided to try a side-scrolling RPG again with Symphony of the Night, and it created a new genre of gaming, dubbed Metroidvanias. Symphony used a similar progression system from Super Metroid, but that’s a story for ‘Two Guys Playing Metroid’.

Konami found massive success going back to what some would consider a failed concept. Why can’t Nintendo give 2-D Zelda another chance? It’s a hard question to answer. We are about to get Breath of the Wild 2, the Link’s Awakening remake, and possibly (if rumors are correct) Link to the Past remake.

Just think, with all the quality of life advancements the side-scrolling platformer RPG has gone through. If they remade Adventure of Link today, it would probably be well received. Having a map system, better controls and battle system, and better AI would make it amazing. They could even go through and redesign the dungeons in the Adventure of Link, make them a bit easier to navigate and allow for some actual puzzle solving.

Better yet, why not just make a Zelda Metroidvania. Just a brand new adventure. Have the player level up their character while playing the game, expand on the leveling system from Adventure of Link. Breath of the Wild gave us different things to expand. What if when you level up, you can expand your inventory instead of your attack or defense? Maybe keep the world map of Hyrule intact but use it similar to Majora’s Mask where there’s a central hub that expands out. Have some mini exploration areas. Sneak in some challenging bosses.

There’s a bunch of potential here for a possible side game Nintendo could create while working on the next bigger title after Breath of the Wild 2. Konami and other companies did cash in on how easy it is to create a quick fun Metroidvania and lately Nintendo has been the absent parent, not adding more titles to the genre they helped create. We know Nintendo is capable of making good games in the Metroidvania genre. I’d say Zelda should have a game in the genre as well.

Let’s open up a discussion on this. What do you guys think? Would you play a Metroidvania Zelda game? What bosses would you like to see show up in the game in side scroller form? Go ahead and direct all comments below, there’s also the Two Guys Playing Zelda Discord, and Twitter.